The way I see it, there are three main questions with regard to this new incarnation. Four if you really want to discuss Downy Jr.’s outings. I don’t. I prefer Iron Man. Anyway, my three questions are this (in order of importance to me personally):

Let’s start at the very beginning. A very good place to start2. 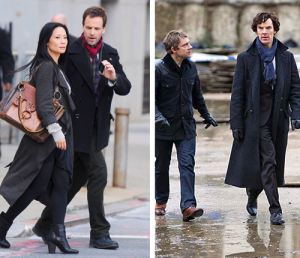 BC has both the best coat and the best British accent. JLM has been in the colonies far too long.

So, how does it compare to Sherlock? Well, this does feel very well into question 2, too. It… doesn’t compare to Sherlock. Not at all really. Nor the source material. Beyond being about a surly private investigator with a British accent, there isn’t much to connect the two.

As an astute fellow Sherlockian pointed out on Tumblr, I’m not sure why they used Sir Arthur Conan Doyle’s character names in this new piece. There’s no London, no Lestrade, no… Sherlock. It’s just a dick with a funny name and a sidekick solving crimes. It’s not like this paradigm hasn’t been plumbed before without using the Great Detective’s name. So why tack it on to this unique piece of drama? I’m not gonna go into it here. Ask Mrs. Moff.

Regardless, beyond getting people to watch the thing, the name adds nothing to the series. It has charms of its own – the guilt-ridden ex-surgeon taking care of the manic, poorly-accented addict who solves crimes because he’s bored. The police are predictably contrary during the pilot whilst being non-characters in the background of Jonny Lee Miller’s mania and Lucy Liu’s straight-woman.

So – is it worth watching? I’d say ‘yes’. At least test it out for a few episodes after the pilot as I will. It’s a very American product – I’d put it closer to Dexter than the BBC’s Sherlock. It has all the nasty murder stuff without the witty interplay or textual-subtextual homoerotic but it has a certain… something that I’ll keep trying. The ending of the pilot was lovely.

Anyway, yeah. How is it possible that JLM – a British actor – has such an appalling British accent? He sounds like Daphne from Frasier!

I’ll leave you on that note and I’ll try to construct something a little more coherent for my next post. 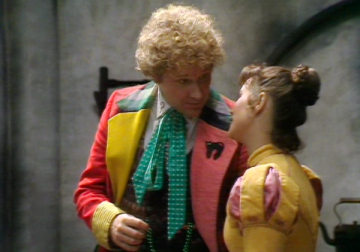 * Yes, Sir Arthur Conan Doyle’s original Holmes never said “Elementary, my dear Watson”. That doesn’t make it any less real than how much excellent and often angry sex goes on in the TARDIS. Case in point behind this link (take a lesson in context before you click that).

1 If you don’t know what I mean, follow the link then do your own research.
2 Okay, that was too British even for me. I apologise. I also blame Genevieve Charnaux.

You’ve got to be kidding me!
(I love this movie)

As I write this in my Rosetta Stone notebook1, I am sitting in a house… somewhere near Mexico City. I’m accompanying my lady friend to a rehersal of her band. I am surrounded by so much equipment that I don’t know whether they’re going to make music or launch this lovely antique-filled home on a mission to Mars.

I love music. I do. I enjoy rock, pop, country, jazz, ska, soul, Motown and more. My regular playlists are so eclectic and varied that no two songs played back-to-back seem to gel at all. From Deep Purple through the Supremes via Dolly Parton, I love all kinds of music2. It seems, however, that I l love music less than almost everyone else I meet. This rules goes double for anyone I happen to sleep with.

I don’t know if anyone else has had this experience, but I never give a correct answer when it comes to favourite bands; I can’t name a guitarist from a single riff3, and I don’t know which band started which monumental movement that should have changed my life.

They guys I’m listening to now are great. Really, they are. I won’t have to put on my boyfriend-wow face and fake enthusiasm. It’s good stuff. I’m even pretty sure I can name all the instruments. After I finished this bit of scribbling, I also helped with the tambourine (badly) and some English grammar in the lyrics! I’m quite proud.

That said, I’m not really sure what genre their music is, nor which bands might have inspired it. I feel like Knives Chau being mesmerized by something I know nothing about4.  I just don’t have the language to discuss music, just like a non-linguist wouldn’t have the words to talk about phonemics, the Proto-Indo-European language or diphthongs. In the broadest possible strokes, I can say if I enjoy some vocals, a guitar solo or lyrics. I kind of know that Bowie was a New Romantic and Marvin Gaye was Motown. Regardless of any of my other traits or interests, this seems to make me a lesser person; I’m less cool and less interesting.

Case in point: on my journey to Mexico City last week, I was flicking through the poorly catalogued music collection on the bus. I came across a song I really enjoyed, with a lead singer whose accent really appealed to me4. I was berated by lover and ex alike for never having heard of the Cranberries. It was a name that I sort of recognised, and when their hits were yelled at me, I did recognise some. Nonetheless, they weren’t a band that was ever really on my rader until I accidentally listened to a  mislabelled song on a Mexican bus.

The song in question:

Right now, I’m surrounded by people who are enjoying making great music. I’m enjoying listening to it while I write. Isn’t that enough? Shouldn’t that be enough?

I have no issue with musical culture or how much it means to some people. I just don’t really understand it. It is, I suppose, the same way that other people don’t understand my passion for Doctor Who, the BBC’s Sherlock or Supernatural6, for example. What does bother me, however, is the ‘indie elitism’ that one sees far too often. The “my music is better than you music” mentality is what put me off looking outside the mainstream for the majority of my teenage years (another girl’s influence, as it happens).

I like music, but I know nothing about it. What’s wrong with that?

Please comment if you’ve had the same experience. Maybe you’ve got your own story of non-musicista prejudice? Let me know. Tell me I’m not alone.

1 The British Museum’s finest.
2 I know, I know. I’m sure you’re already rolling your eyes at my examples.
3 Except Queen’s Brian May.
4 If you don’t get the reference, do yourself a favour.
5 My weakness for accents is a whole topic in and of itself. The next time I do something stupid for a pretty accent, I’ll let you know. Refer to this post for reference to my summer spent chasing Belarussian crush I had entirely thanks to the pretty, atypical way she spoke.
6 If you don’t know them, look them up. Seriously.